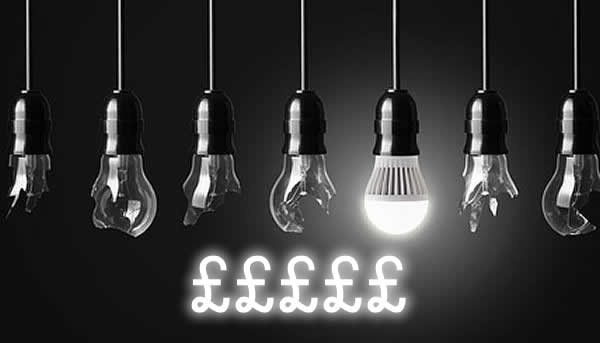 During the winter months, the average households lighting bill increases by over 20% due to darker mornings and nights. By simply changing to the latest super efficient bulbs could save you approximately £200 plus a year for itself within six months.

Old fashioned bulbs are 10 times less efficient at converting electricity into light, which explains the difference in wattage required (6W for LED opposed to 60W for the filament variety).

Although they are considerably more expensive to purchase than traditional light bulbs and other “low energy” bulbs, they consume significantly less electricity, which will quickly recoup your outlay in lower bills. As a approximate figure, LED’s can cut power costs by up to 80%.

Other benefits of LED’s are that they come in all popular shapes and sizes of incandescent lights – bulb/candle/drop/pear etc shaped. Also, you are not restricted to one shade of colour, there are many possibilities such as “daylight” to “warm white” etc.

A safety aspect to LEDs is that they produce zero heat compared with traditional light bulbs, which can cause serious injury if left on for long periods. To add to the increasingly long list of benefits, LEDs last a long time (or atleast they should!).

Some manufactrers claim that their LED bulbs will last 40,000 hours and not blow until you have switched them off 90,000 times, which if true is very impressive and very cost effective.

If you require more information regarding LED lighting or need B&J Electrical to fit LED’s in Cardiff or the surrounding area – get in touch!